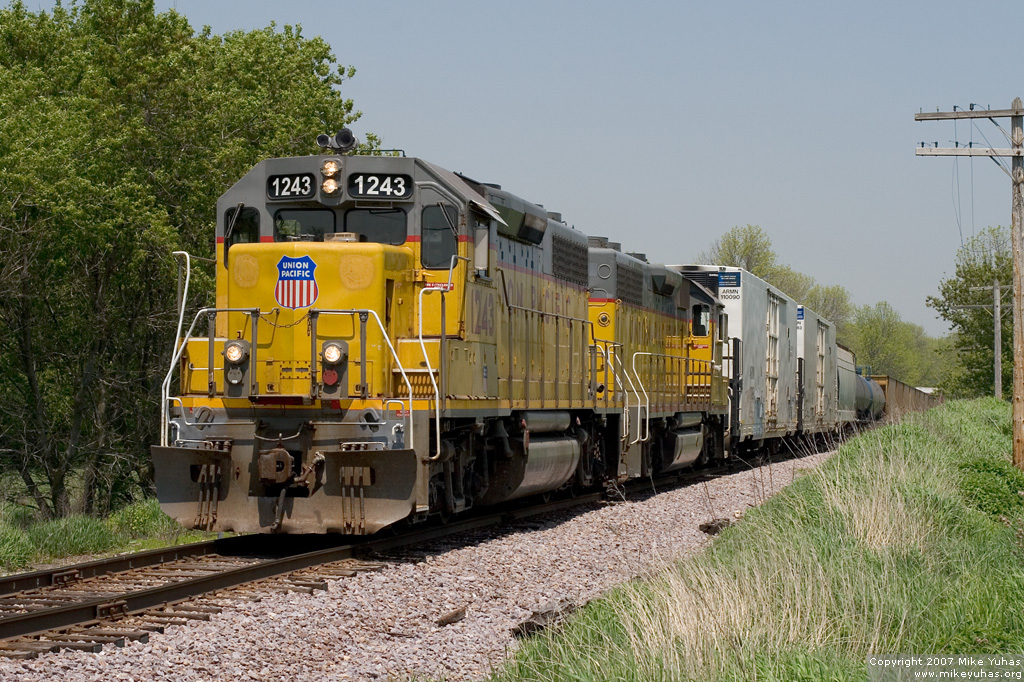 UP's LPA79 job, the nightly Butler-Sheboygan turn, waits at Mink Ranch Road headed south, Butler-bound. Lengthy speed restrictions, necessitated by track conditions, have wreaked havoc with normal operations on the line recently. This train departed Butler around 9:00 PM last night, more or less on schedule, but took about 2.5 hours to reach here northward, a distance of about 27 miles. Further up the line, LPA79 tangled with an LPA81 coal train crew who was spotting loads in Sheboygan, tying up the main line. LPA81 (itself delayed in arriving Sheboygan last night due to track crews and conditions) died on hours, resulting in an LPA82 crew being called to finish spotting the coal, eventually opening up the main so LPA79 could get into Sheboygan. Before LPA79 arrived, it was clear they wouldn't be able to get back to Butler on hours, so the LPA82 guys relieved the LPA79 crew. 79's crew cabbed back to Butler, and the train (now crewed by the LPA82 guys) departed Sheboygan around 7:00 AM, about the time the LPA79 crew would have died.

On this day, a rail defect detector car was working north from Mequon, which meant the local had to park here at Mink Ranch Road at about 9:00 AM to avoid the MOW crews and detector car. The first relief crew (LPA82, in case you're trying to keep track) ultimately expired on hours and was cabbed back to Butler.

A second relief crew (LPA81) was called, cabbed to Mink Ranch, and hopped on the train about 20 minutes ago. They couldn't proceed, though, because the detector detected myriad broken and cracked rails that needed replacement before any trains could run over the affected trackage. It would be a while before this train could turn a wheel.